James Chubb, wildlife expert joined the team on an autumnal foray, find out how the day unfolded...

This truism sprang to mind this morning when, after forty minutes of our guided fungus foray with the legend John Wright, we were still within sight of the coach. In fact, we had only barely crossed the road.

Several hours and seventy species later we were all glad of this slow pace and intimate examination of the woods and pasture, so much was the steep gradient of the learning curve on this majestic day.

With the glowing lights of Park Farm far below us piercing through the morning’s early Autumn mist, a dedicated group of us gathered in the car park for a warm welcome, drop scones and Julian Temperley’s rather delicious Kingston Black to warm our tummies. The day was set to reach a balmy 16 degrees, so a warming snifter was hardly necessary but no less welcome.

After Stephen’s introductions we jumped in the fun bus and trundled the few miles along the lanes to the location of our first foray, a secret woodland which was brimming with mushroom loveliness. The initial slow pace of progress allowed everyone to get their eye in and that first hour saw John dashing hither and thither between participants, patiently waiting like sentinels alongside their cherished fungal discoveries. Its not a competition, i know, but I was secretly elated to stumble upon the first real rarity of the day!

A deep purple trumpet, decrepitly tilted with age, with deeply riven gills extending down its stout stalk, Cortinarius violaceus caused a stir with John. I should take no credit for its finding; I was lucky to happen upon it and the only thing to strike me was its shocking colour, there was no recognition of its notability.

A morning scrambling over mossy hedgebanks and through woodland edge followed, after a hearty chicken and ham pasty, with a tour of the pasture mushrooms and eventually led us to the heart of River Cottage HQ. While chef Connor regaled us with four fabulous recipes for wild mushrooms, John sat hunched over the table of finds and meticulously cross checked them and wrote out name cards for each of the 67 specimens on the table - three more remaining in the field, such was their rarity.

It made for a fantastic sight! An array of earthy colours punctuated with the vividly synthetic hues of waxcaps and a shockingly scarlet fly agaric. If we had not been warned of several unpalatable and one or two highly poisonous fungi within its ranks, many of us may have been tempted to take a nibble out of one or two.

Shortly the day was brought to its delicious finale with bacon and chanterelle tagliatelle followed by chocolate mousse and pear purée. The freshly made pasta was incredible, enveloped as it was in a sauce made from mushrooms we ourselves had gleaned from the morning in the woods.

Dan the Farm Manager drove us back up the hill out of Park Farm on the back of the tractor, while East Devon fell under a cooling autumn dusk. This had been a day to cherish, shared with fellow enthusiastic toadstool novices and brought together perfectly by the casual expertise of John and Stephen and the unseen efforts of many hard working pairs of hands at HQ.

You can find more of John's foraging courses here.

Find out more about James' wildlife and conservation work by following him on twitter. 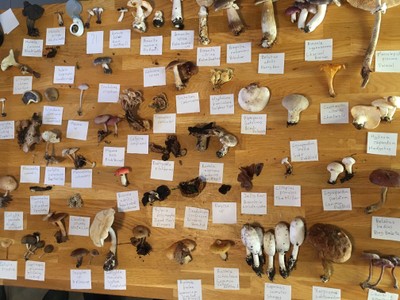