Skip to navigation | Skip to content | Skip to footer
Home / Latest news / An interview with John George, saxophonist with Joey the Lips

An interview with John George, saxophonist with Joey the Lips

We’re thoroughly looking forward to Joey the Lips opening our Summer Fair weekend on Friday 14 August. We caught up with the band’s saxophonist, John George to find out a bit more about their eclectic funk, soul, blues and disco sound. 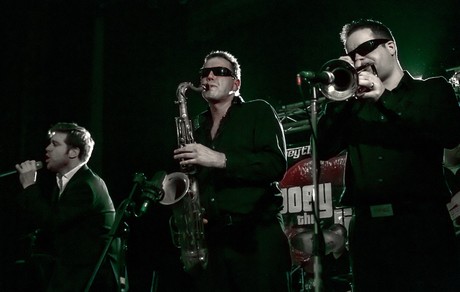 Are you looking forward to performing at River Cottage?

When and why did you start playing and form as a band?

We formed in 1994, originally the band was based on the music from the film The Commitments, which was a 10-piece soul band with three vocalists and a three-piece horn section.

Which famous musicians do you admire? And who would you say that you draw inspiration from?

As a saxophonist mine would be Maceo Parker, John Coltrane, Dave Sanborn.

What are your songs about?

We were originally a soul band but diversified a while ago so that we could perform all genres of music. The songs are covers but we put our own slant on the songs.

How do you describe your music to people?

The gig is performed as a show which we call a Funky Soul Blues & Disco Revue and it’s a high energy performance in that we jump about a lot rather than just play the music.

Have you had any Dave Grohl-esque mishaps during a performance?

Yes I’ve done just that, in the dark during a sound check, no broken bones though. We’ve had the guitarist vomiting off the side of stage from a dodgy pub meal (only last week!), our ex-sax player tripping over a gap in the stage which bent her sax and her ankle – she finished the show but sitting on the stage. On a trip to Ireland the keyboard player’s equipment didn’t arrive on the same flight as he was driving the mini-bus and got it stuck under the NCP car park gantry. He made the flight but his gear didn’t!

Are there any foodies in the band?

Yes definitely, most of us in the band love our food. There’s quite a bit of down time when you’re in a band and we like to research interesting eateries to visit on our travels. We’ve had some great meals, and a few stinkers too, at selected venues.

Who is the worst chef in the band?

That'll be me! I once cooked a 'fishy' stir-fry and on the first mouthful one of the band said that his body wouldn’t physically let him swallow it.

Book your ticket for Joey the Lips at River Cottage HQ on Friday 14 August, just £15 per person. Or, why not join us for the whole weekend?