Hugh loves wild swimming and swears by the positive impact of “cold water treatment” on his wellbeing. 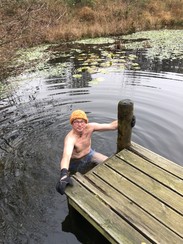 It all started when I made Easy Ways to Live Well, the BBC1 show about health and well-being which I hosted with my brilliant co-presenters Steph McGovern and Zoe Williams. Dr Zoe had been researching ways of tackling stress, and found emerging but compelling evidence that “cold water treatment” was proving to be very helpful for some people in reducing stress and boosting mood and general well-being.

Now I didn’t consider myself a particularly stressed out person. But I also had to admit there’s no doubt that when I’m into a new project or juggling a number of things, I do get quite “hyper”, waking up early — and bringing a bit too much of that work home with me at the end of the day. So even if I was a bit reluctant to concede that work and life were getting me a bit too riled, a bit too often, my family weren’t shy of suggesting otherwise.

So Zoe decided that I was the one who should “road test” the cold water treatment (while Steph got to do belly dancing….and turned out to be a complete natural).  The deal was that I would swim outdoors – in the sea or fresh water – whenever I could, and if that wasn’t practical, I would start the day with a cold shower.

Just to add a bit of spice to the proceedings (and frankly, up my stress levels a notch or two), my treatment began in January – so there was no shortage of seriously cold water around to make sure I was “in at the deep end”. I was only a few days into my cold shower routine, and thinking the whole thing was, frankly, a bit barmy, when the production team arranged for me to join a group of cold water swimming enthusiasts at a tidal swimming lake near Clevedon, just outside Bristol. 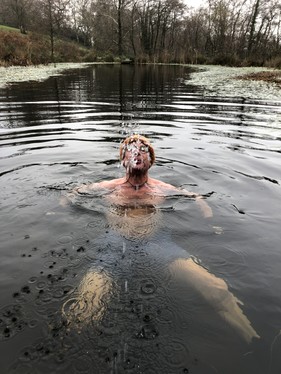 It was mid-January and when I arrived in the morning there was still a hard frost on the ground. The tidal pool is actually quite shallow – about 5 feet. So when the air temperature plunges, unlike the sea that feeds the pool every couple of weeks on the highest tides, the water in the pool gets cold fast. The group always like to know the temperature of the water they are swimming in – and on this occasion it was a terrifyingly glacial 4 degrees centigrade. “That’s the coldest we’ve had so far this winter,” I was told. “In fact, that’s pretty much as cold as it gets.” “It’s so exciting!” said one lady, hopping up and down because the ground was literally too cold to stand on. “We love it when it’s really cold”

If you saw the show you may remember how utterly unprepared I was for the shock of this cold water. As I slowly went down the steps into the icy brine, the sensation was so intense I could barely speak or breathe. In all honesty, it was really far too cold for a beginner like me, and if I hadn’t been in the safe hands of the swim club, it would have been dangerous to attempt something like this. They wouldn’t let me stay in for more than 2 minutes – not that I had any intention of doing so!

Most of the regulars on the other hand were swimming round merrily, chatting to each other, and stayed in for at least five or six minutes, some for ten or more. Once out of the water, there were hot drinks, hot water bottles, giant fleecy bath robes, and we all had several thermal layers to struggle into. 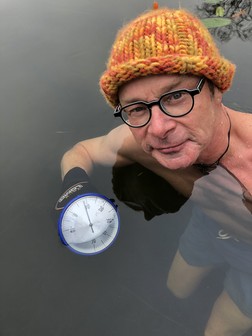 As I struggled into my clothes, I was shivering uncontrollably, with chattering teeth and completely numb extremities (and I’m not just talking toes and fingers). Yet, within a minute or two of coming out, I also began to feel an extraordinary tingle on the surface of my skin.  And a few minutes after that, emanating from inside my body,  came the strange sensation of an inner glow, as if my personal internal immersion heater had been switched on, and was slowly heating me up from the inside. Alongside these curious physical sensations was an unmistakable buzz, a mild but distinctive euphoria. I still felt cold. Really, challengingly, freakishly cold at first. But with the buzz, and the tingle, and the engine inside me revving up a notch, I knew that my body had a plan. That it was going to take care of this, of me. It was going to warm me up and sort me out and get me back on track for the day ahead. And that felt amazing.

Talking to the others, I heard stories of lives transformed by this ritual. Many of the group were doing this severa l times a week. They loved the camaraderie of gathering for this shared event of endurance and empathy. But, more importantly it seemed to me, they found the intensity of the physical experience, and the undoubted mental changes that accompanied it, profoundly positive. “I just know I’ll go on doing this for the rest of my life,” said one. That’s a pretty clear recommendation!

And so, even though minutes before I was close to certain that “cold water therapy” was absolutely not for me,  I decided to persevere. I didn’t immerse myself in such extremely cold water again for almost a year. But I did get straight back to my cold shower routine. This involves starting with a regular hot shower – doing the soapy bit and getting clean (always a good idea), then turning the shower down to its coldest setting, and bracing myself for the chilly blast. The strange thing is, it’s always a shock — and initially, not a pleasant one! You never get used to it, and every time it happens my first thought is something like “why am I doing this again??” But after 30 seconds or so it becomes the familiar friend, the cooling soothing balm. And after 3 or 4 minutes my skin and body are cold enough to elicit the sensation I want and almost need. It starts as soon as I step out of the shower and grab the towel. And it stays with me, in a present, noticeable way, for at least a couple of hours. There’s no crash either. Just a lasting sense that I’ve started the day well.

That January swim in the sea pool was almost two years ago. And since that time there hasn’t been a single day when I haven’t given myself a significant dose of cold water, whether by shower, bath, river, pond or sea. When I started we were living in Bristol during the week, and back in Devon most weekends. Now we are back in Devon full time. We are incredibly lucky to have a pond at the bottom of our paddock. It’s full of lilies and weeds, but it’s just deep enough in the middle to keep a channel clear for swimming. It used to be a summer only thing – splashing around with the family on the balmiest of days - even then the spring-fed water is cold.

At the moment I am swimming in the pond almost every morning. Sometimes, if I have an early appointment or have to get somewhere I might settle for a cold shower. Our water comes from a spring fed well, so the shower is almost as cold as the pond! When I travel for work, my new anxiety is that the water in the hotel won’t be cold enough to deliver. And so I research to see if there’s a wild swimming spot nearby.

In these strange times, and grounded by Lockdown 2,  I haven’t missed a pond swim for several weeks. And I see no reason why I would, at least until Christmas and beyond. Sometime in the new year, I guess I’ll probably travel again for work. And hopefully the hotel shower or bath will see me right, at least at this time of year. If I have to order a  bucket of ice to take the bath water down a few degrees, it wouldn’t be for the first time…