We are very sad to hear of the passing of our dear friend and colleague Nick Fisher. 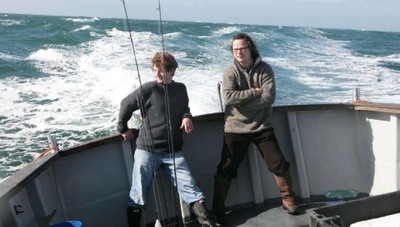 He was an inspiring teacher and generous contributor at River Cottage down the years. At the very beginning of our cooking school adventures at River Cottage HQ, Nick was the co-host, with Hugh, of our legendary Catch and Cook days, taking guests out fishing from Weymouth harbour, showing them how to catch fish and how to prepare their catch for the kitchen. Nick always had infinite patience with our guests and shared his skill and knowledge in the most accessible and generous way. And he had an amazing knack for making sure that everyone on board managed to catch a fish.

Inevitably Nick and Hugh went on to co-author the River Cottage Fish Book, a comprehensive guide to catching, sourcing and cooking British fish and shellfish in a sustainable way. Nick also appeared regularly on the River Cottage TV shows, as Hugh’s go-to fishing buddy, always ready with some resourceful and unexpected ways of catching fish (with home-made bottle-top fishing lures, for example). They also collaborated on a fish-focussed spin off series called River Cottage Gone Fishing, which saw Hugh and Nick fishing around the Channel Islands and rustling up delicious dishes from lesser known species such as gurnard, garfish, pouting and sandeels. Nick also wrote the much-loved River Cottage Seafishing Handbook, a “couch-to-beach” beginners’ guide to catching fish and shellfish to take home and cook.

But Nick’s work with River Cottage was just a small part of a rich and varied career as a screen writer, journalist, agony uncle, novelist and TV presenter. He won a Bafta for his highly original Children’s drama Giblet Boys, which he wrote to entertain his three sons. And he explored midlife masculinity in the acclaimed series Manchild, starring his friend Nigel Havers. He was a senior writer on seminal hospital drama Holby City for more than a decade. In 2016 he published his first novel Pot Luck, a hugely entertaining story of skulduggery and murder set in the fishy underbelly of Weymouth with it’s “raggedy mob of opportunists and bottom-feeders”.

Nick first came to Hugh’s attention as the presenter (and creator) of the maverick and unpredictable Channel 4 fishing show Screaming Reels. As a massive fan of the show, Hugh pursued Nick with a view to collaborating on new ideas for a fishing and cooking show. That never quite happened, and instead they became fishing buddies, boat partners and life-long friends.

We would like to thank everyone for their many kind messages and warm memories of Nick which we have received in the last 24 hours. Most of all, our thoughts are with his wonderful family at this very sad time.