October in the kitchen garden 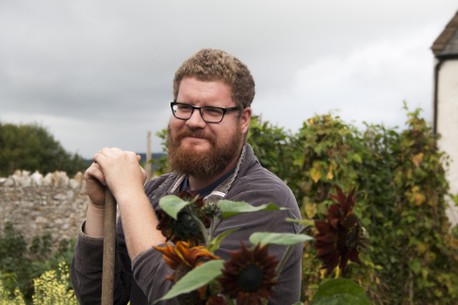 Look after the soil and the plants will look after themselves” is a motto I uphold. October is a time to make a start on improving the life source of your garden: the soil. As we continue to remove the remains of the summer crops from the garden, we clear then cultivate a section at a time, spreading the arduous task of digging over the whole month. If you leave it all to a couple of days, it can become a laborious chore. At Park Farm, we are lucky enough to have nine years of cultivation under our belts, so our soil is friable and free-draining.

If you have heavy clay soil or are in the early stages of your quest for delicious veg, leaving heavy clods over winter for freeze-thaw weathering will break down the soil, making spring cultivation much easier. Removing the remains of perennial weeds at this time will reduce the risk of perpetuating the problem. We hold off on adding compost until December, applying a liberal mulch just before Christmas, which allows the worms to do the incorporation for us.

It is imperative to put back what you take away, making compost the most important addition to your soil. It improves soil structure, retains moisture and replenishes nutrients that have been depleted during the last growing season. With an excess of plant material from the spoils of your October clearance, now is the time to make serious headway with your compost.

We operate a three-stage system, turning one box into the next, which aerates the material and increases the speed of decomposition. It is important to add a variety of plant material to your compost – mixing greens (nitrogen) and browns (carbon), and spreading in even layers, rather than piles.

All raw veg waste from the garden and kitchen is added, leaving out cooked food, meat and dairy, as it will attract rats. Building your heap onto bare earth will allow worms to get in and excess water to drain away.

Now is the time to sow winter broad beans, onions and garlic. Aquadulce is a safe over-wintering variety of broad bean, and is hardy enough to survive the frost. Sow outside, direct into fertile, free-draining soil – keep an eye on the seedbed, as mice can see your seeds as a sneaky Autumn snack. You will get an early crop of beans in spring that will finish just as the new season beans begin.

Our polytunnels are being planted up with chard, winter leaves and herbs, providing the kitchen with essentials all throughout coming months. We space the seedlings further apart, reducing the risk of grey mould, which can be a problem in damp conditions. Coriander and parsley feature heavily, as they refuse to bolt with the colder weather, and liven up rich winter dishes.

With the first frost comes the big reveal, as the leaves wither back to expose the contrasting colours of our squash crop. Versatile in the kitchen and with a long shelf life, squash is the lynchpin of our autumn/winter menus, and with little care needed over the summer, the benefit far outweighs the effort.

Read Will's column every month in The Landsman.

Will teaches our popular Get Growing course, read more here.