There are few better partnerships than pork and apple. There are even fewer better than pork and cider, a bit of old English alchemy. This recipe can be applied to a whole leg of pork, weighing 10kg or more, but you can use a smaller portion off the bone or even a chump. The quantities here are for a small, whole boned-out leg or half a large leg. Ideal for Boxing Day, this needs at least 15 days curing time. 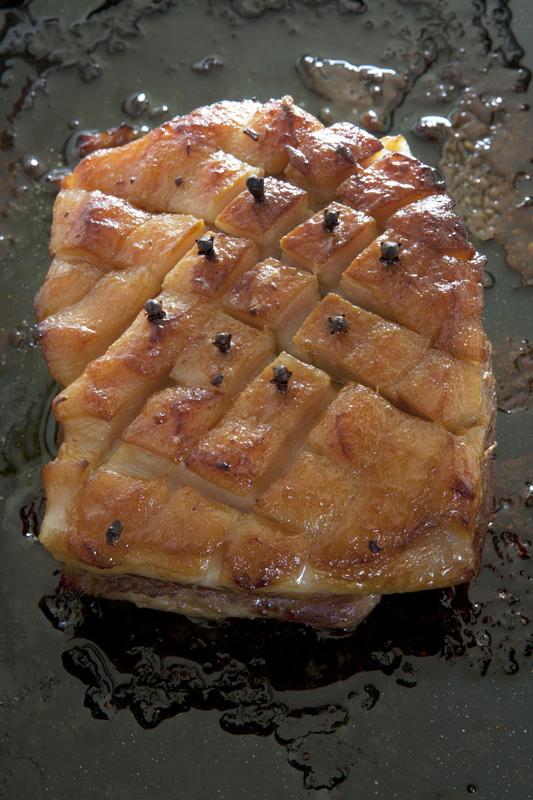 Put all the ingredients for the brine into a large saucepan, bring to the boil and leave to cool. Transfer to a food-standard brine tub and chill to 3–4°C.

Weigh your piece of pork, then place it in the tub and submerge it completely in the brine, using a food-standard tray with a weight on top. Leave the pork in the brine, in the coolest place you can find if the tub is too large for your fridge, for a minimum of 3 days (or maximum of 4 days) for every kg. The minimum time will suffice if you plan to cook and eat the ham soon after it has finished curing, but you should use the maximum time if you intend to keep it much longer.

After its allotted time, remove the ham from the cure, wipe it dry with a cotton cloth and hang it to dry in a well-ventilated cool place for 24 hours.

You can then cold-smoke it if you like: hang it high above a hardwood fire or put it in your cold smoker and either smoke it continuously for 24 hours or intermittently (6–12 hours a day) for 2–4 days. The ideal air temperature where the ham is smoking is 27°C; a little variation won’t hurt, but it should not exceed 40°C.

Smoked or unsmoked, this ham keeps well if you go for the maximum cure time: hang it in a well-ventilated outbuilding, or covered porch where a draught can get to it but the rain can’t, and it should keep right through the winter months. In warmer weather, hams are at risk from flies and other bugs, so it’s best to get them cooked before too long. A minimum-cure-time unsmoked ham should be kept in the fridge, wrapped in a cloth or muslin, but not plastic, and cooked within a month of curing.

Many recipes suggest hams should be soaked in plenty of fresh water, which is changed every 12 hours, for 24–48 hours depending on the length of the cure, before boiling. We don’t subscribe to this – it smacks of not getting the original cure right. If you draw the moisture out and drive the salty cure in, then undo part of this by soaking it in water, the ham won’t know whether it’s coming or going.

Instead, put your ham in a large cooking pot, cover with water, bring to the boil and simmer very gently for 2–5 hours, depending on size. If the water tastes very salty after the first hour of cooking, pour at least half of it away and top up with fresh boiling water from the kettle. When the fat starts to separate from the meat, it should be ready.

You can either serve the ham plain-boiled or add a further stage of baking, which works well for a festive centrepiece on Boxing Day: remove the ham from the cooking liquor and allow it to cool slightly. Preheat the oven to 180°C/Gas mark 4. Slice the skin off the ham and score the fat in a diamond pattern. Mix 100g honey with 2 tbsp English mustard to make a honey mustard glaze and smear it over the ham. Place in the oven for about 40 minutes–1 hour, depending on size, until caramelised. Serve hot or at roomtemperature. Sumptuous.

Note: There is an alternative method for brining, using a brine pump. Instead of submerging the product in the brine you use a pump to inject the brine into the product. This method is a bit too hit or miss though as it doesn’t give a uniform result. And it doesn’t work at all on anything smaller than a large chicken.

The magic of Christmas meets the alchemy of curing and smoking on our wonderfully festive one-day course.