This method will give you tangerine-sized doughnuts, but you can make them any size you like – simply adjust the frying time accordingly. Little golf-ball-sized doughnuts make a brilliant pudding with something to dip them into – try sieved raspberries and cold custard. 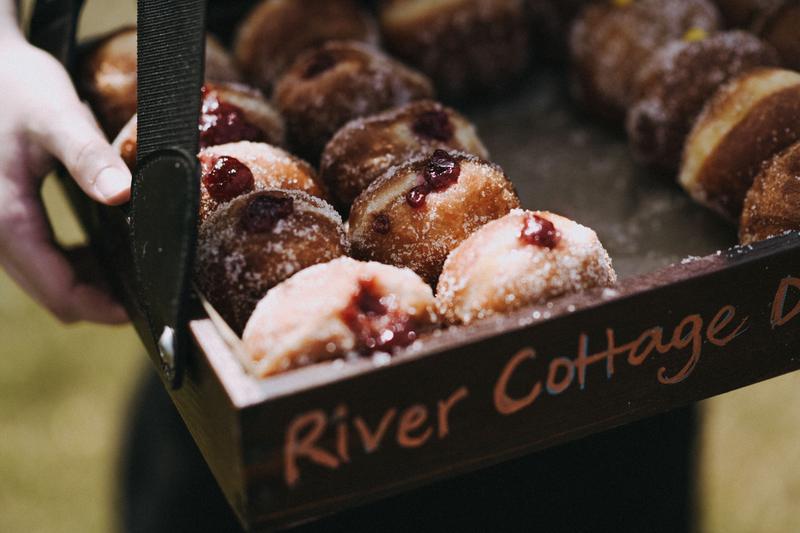 You really need to use a food mixer fitted with a dough hook for this recipe. Mix by hand if you like, but it will be a rather sticky affair. Put the flours, milk, butter, sugar, eggs, yeast and salt into the bowl of the mixer and knead with the dough hook for approximately 10 minutes. Dust the dough with a little flour, turn it out on to a floured surface and shape into a round.

Clean and dry the mixing bowl, put the dough back in it and cover with cling film or a plastic bag. Leave to rise until it has doubled in size.

Turn the risen dough out on to the work surface, press out all the air and divide into 20 equal pieces. I find it easiest to weigh them – each piece should be around 50g. Roll them into balls and place on a floured cloth or board. Cover with cling film or a plastic bag and leave to prove until doubled in size.

Heat a 5-8 cm depth of oil in a deep, heavy-based saucepan to 175C; the oil must not fill the pan by more than a third. If you do not have a frying thermometer, check the oil temperature by dropping in a cube of bread; it should turn golden brown in a minute. Deep-fry the dough balls in batches for about 5 minutes, turning them over every now and then so they brown evenly.

Remove the doughnuts from the oil with a slotted spoon and drain well on kitchen paper for half a minute or so. While they are still warm, toss in caster sugar to coat generously. Keep warm while you deep-fry the rest then enjoy your doughnuts – as soon as possible.

Add any of the following to the mixer along with the other ingredients:

You could also flavour the sugar the doughnuts are tossed in with ground cinnamon, ground star anise, or ground mixed spice. Or fill your doughnuts with some runny jam, using a syringe or small piping bag fitted with a thin nozzle.

At least 1 litre sunflower or vegetable oil, for deep-frying

Our cake making courses are a firm favourite here at the River Cottage Cookery School. Our Cakes and Sweet pastry course is no exception...