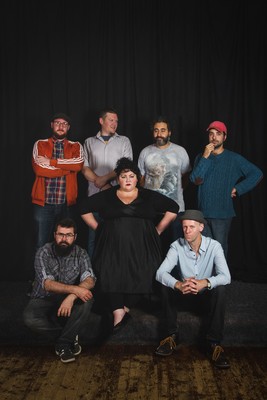 "Reminds me of the first time I heard Amy Winehouse with the Dap Kings” - - Chris Hawkins, BBC 6 Music

For a good few years, Honeyfeet has been a conduit for the ideas and expressions of an exotic mixture of Manchester based musicians. Jazz? Yes, some of that! Folk? Stick that in there! Hip-hop? I thought you'd never ask! Someone once called it Folk-Hop and Barrelhouse-pop, and that's just vague enough to make sense. Honeyfeet have spent the past 9 years tearing around festival stages and theatres, clubs and fields melting down blues and pop, jazz and disco, pushing air molecules around with instruments and making friends in the process. It's all very lovely. It helps that they are fronted by Ríoghnach Connolly “a remarkable singer and flautist who...can ease from Irish traditional influences to soul” (The Guardian).

In recent years, Honeyfeet have performed main stages at Shambala, Beautiful Days, and Belgium's Copacobana Festival, along with wowing audiences at Glastonbury, Boomtown, Wilderness, Germany's Kultursommer, Kendal Calling and Bimble Bandada, as well as selling out shows across the country.

Honeyfeet's acclaimed album, Orange Whip, came out on Wah Wah 45s in March 2018. It was BBC 6 Music's Album of the Day in April 2018. The band have also recently performed a live session for Craig Charles' Funk & Soul Show on 6 Music.

“Makes you proud to be into this kind of music” - Craig Charles, BBC 6 Music