This is my take on the classic Chelsea bun, which is a perfect vehicle for the irresistible combination of apples, dried fruit, nuts and spice. 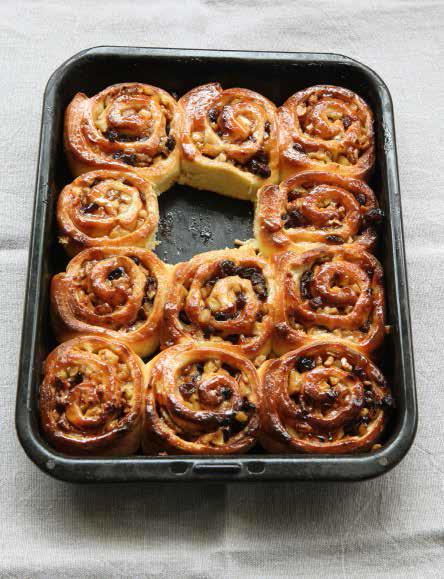 In a bowl or jug, whisk the warm milk, yeast and sugar together well and leave for about 15 minutes until the mixture is frothy.

Mix the flour and salt thoroughly in a large bowl. Pour in the yeast mix, melted butter and beaten egg and mix to a rough dough. Turn on to a lightly floured surface and knead for about 10 minutes until smooth and silky. It's a slightly sticky dough, so you may want to flour your hands a little, but try not to add more flour than you have to.

Put the dough in a lightly oiled clean bowl, cover with a damp tea towel or place another bowl upturned on top, and leave until doubled in size. This will take at least an hour, but is likely to take more like 2 or 3 hours because the egg and butter in the dough slow down the action of the yeast. Liberally grease a deep rectangular baking tin (I use one 25 x 30cm) with some of the melted butter.

For the filling, peel, core and cut the apples into 5mm–1cm dice. Heat the 25g (non-melted) butter in a large frying pan over a medium heat and cook the apples for 8–10 minutes or until softened. Leave to cool.

Gently tip the risen dough on to a floured surface and roll out lightly to a rectangle about 45 x 30cm, with a longer side towards you. Brush the remaining melted butter over the surface, leaving a 2cm margin free at the furthest edge. Scatter over the apple, raisins and walnuts. Mix the sugar with the cinnamon and sprinkle this over too. Roll up the dough, from the edge closest to you, enclosing the filling (as you would a Swiss roll).

Trim the ends to neaten, then cut the roll into 12 equal pieces. Arrange these cut side down in the baking tin. Put a damp tea towel or another baking tin upturned on top, and leave to prove in a warm place for a good hour, until nicely puffed up. Preheat the oven to 200°C/Gas 6.

Bake for about 25–30 minutes, until the buns are deep golden brown. Warm the jam with a splash of water to loosen it, then brush over the buns while they're still hot. Leave to cool, at least a little, before eating.

Our cake making courses are a firm favourite here at the River Cottage Cookery School. Our Cakes and Sweet pastry course is no exception...