Has featured in the river cottage veg TV series, and taken from River Cottage Veg Every Day! 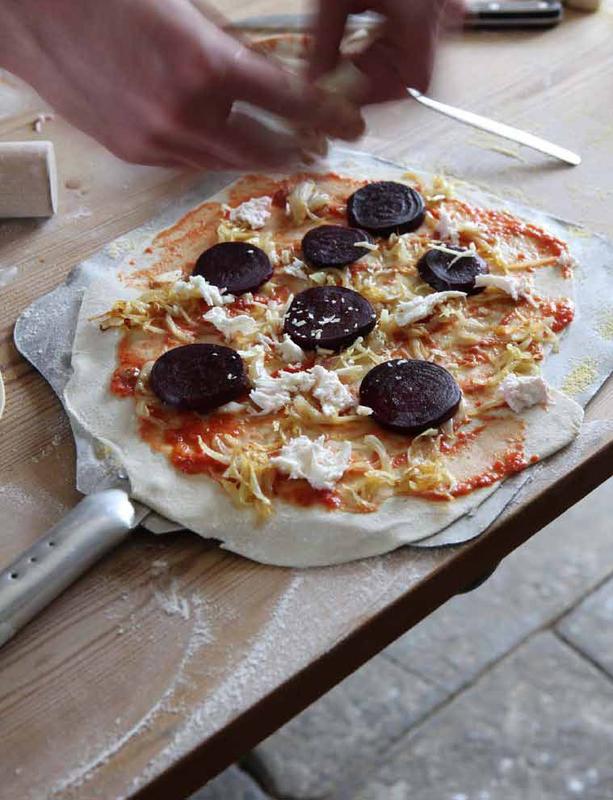 Put the two flours into a large bowl with the salt and yeast. Mix well. Add the oil and 325ml warm water and mix to a rough dough. Flour your hands a little. Tip out the dough on to a work surface and knead rhythmically for 5–10 minutes, until smooth. This is quite a loose and sticky dough, which is just as it should be – you get better-textured bread this way – so try not to add too much flour if you can help it.

It will become less sticky as you knead.

Trickle a little oil into a clean bowl, add the kneaded dough and turn it in the oil so it is covered with a light film. Cover with a tea towel and leave in a warm place to rise until doubled in size – at least an hour, probably closer to two. You can also prove it in a floured, cloth-lined dough basket, like the one in the picture.

When the dough is well risen and puffy, tip it out and 'knock it back' by poking it with your outstretched fingers until it collapses to its former size. It's now ready to be shaped to your will.

Heat the olive oil in a frying pan over a medium heat and add the onions. Once sizzling, reduce the heat to low and cook gently, stirring from time to time, until they are soft and golden – about 15 minutes. Season with salt and pepper.

Tip the dough out on to a lightly floured surface and deflate with your fingers. Leave it to rest for a few minutes, then cut it into three. Roll out one piece as thinly as you can.

Slide the pizza on to the hot baking sheet in the oven (for a really crispy crust), or you can simply lay the baking sheet on the hot one in the oven (to avoid the tricky pizza transfer). Trickle with a little olive oil and bake for 10–12 minutes, until the base is crisp and the top bubbling and golden. Repeat with the remaining dough and topping. Serve hot, cut into wedges.

For the magic dough:

1 tablespoon rapeseed or olive oil, plus a little extra for oiling

3 tablespoons olive oil, plus a little extra to trickle

1 ball of buffalo mozzarella (about 125g)