Scallops come complete with their own little frying pans – their shells. If you can get hold of some live, hand-dived scallops in the shell this is a great thing to try on the fire. The sweet scallop meat takes on a superb flavour from the smoky embers, but it’s the bubbling, garlicky butter with black pudding and a hint of rosemary that make this recipe so incredibly tasty. 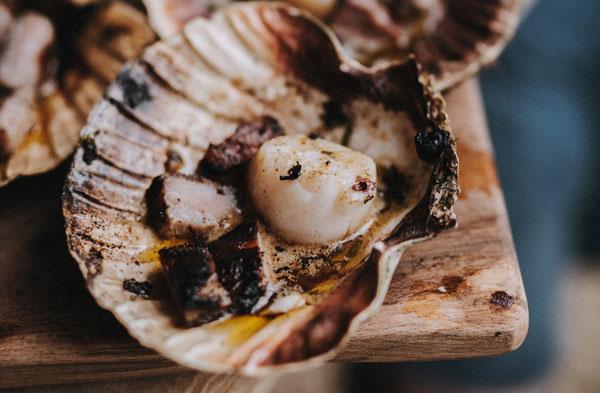 Prepare your fire. You’ll be cooking directly in the embers so they need to be super-hot.

It is possible to buy prepared scallops in the half-shell, ready to go, but if you’re buying them live then you’ll need to prepare them yourself. The shell will at first be shut tight, but it may well open up a few centimetres over 48 hours. To open or shuck the scallop you need a thin-bladed knife, such as a filleting knife – one with a little flex is good.

Hold the shell vertically (round-edge down on the board, hinge at the top) with the flat side of the shell facing towards you. Find an opening part-way down the edge of the shell to insert the knife into. If there is no opening, wangle the knife tip in anyway. The idea is to keep the knife as tight to the flat of the shell as you can, and carefully cut down through the muscle where it meets the shell.

With luck and practice, the shell will open and the scallop meat will remain whole. You need to get rid of the dark gut sac at the back of the scallop, plus a small strand of black intestine. Make a little incision just behind where the orange roe joins the meat and peel off the gubbins, leaving the orange roe with the meat (or you can remove the roe if you prefer). You may wish to cut off the small piece of extra-white tough muscle on the edge of the more tender flesh (as chefs often do); it’s up to you.

Place each scallop nugget in its cleaned cupped half-shell and dot with the softened butter. Crumble over the black pudding and scatter over the sliced garlic. Season with plenty of salt and black pepper and add a little piece of rosemary sprig to each scallop shell.

Level out the glowing white embers of the fire with a stick, then carefully place the scallop shells directly onto the coals. The shells need to sit level. The scallops will heat up quickly and the butter will start to sizzle, frying the scallops in their own shells. After 1–2 minutes (depending on size), use tongs to turn each scallop over, without disturbing the shells.

Cook for a further minute, until the scallops are cooked through, then carefully remove each shell from the embers. If at any point you think the butter is burning, move the shell to a less-hot part of the fire.

Set the scallops on plates or stones and tuck in, but be careful of the hot shells.

Serve with bread and a green salad.

6–8 large scallops in their shells

A couple of rosemary sprigs

Prepare your fire. You’ll be cooking directly in the embers so they need to be super-hot.

Serves 2 as a starter

Spend a day with Gill Meller and learn all you need to know to skilfully cook outdoors over fire.