This hearty curry is fantastic in late summer or early autumn. If you want to make it ahead of time and refrigerate or freeze it, leave out the yoghurt and add it at the last minute, just before serving. 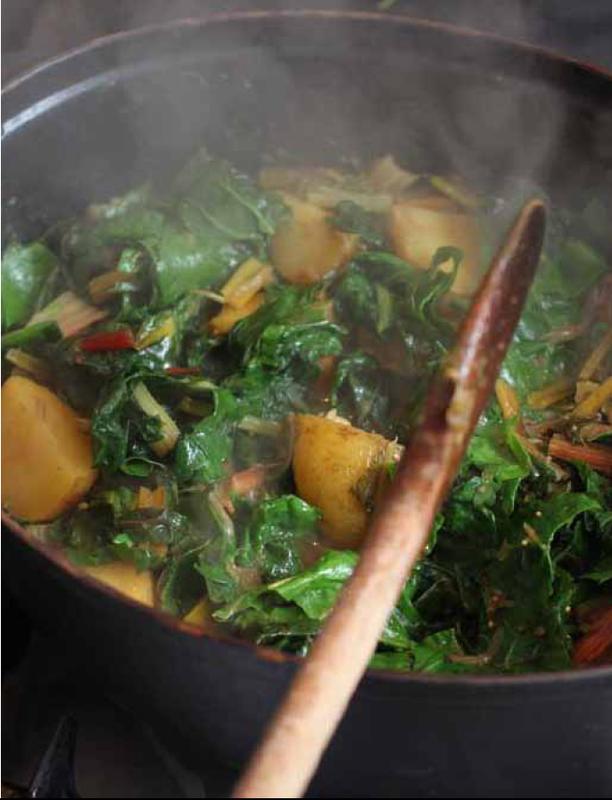 Separate the chard leaves from the stalks. Cut the stalks into 2–3cm pieces and roughly chop the leaves.

Heat the oil in a large saucepan over a medium heat, add the onion and fry until just golden. Meanwhile, pound the garlic, chilli and ginger together with a pinch of salt to a paste. Add to the onion and cook, stirring, for a couple of minutes. Tip in the rest of the spices and stir for a minute or two.

Add the potatoes and chopped chard stalks and fry, stirring frequently, for 5 minutes, so that they are well coated with the spice mixture. Pour in about 400ml water – enough to just cover the veg. Bring to a simmer, cover and cook for 10–12 minutes until the potatoes are just tender. Add the chard leaves, stir and cook until just wilted.

In a bowl, whisk together the yoghurt, tomato pur e and some of the hot liquid from the curry. Remove the curry from the heat, stir in the yoghurt mixture, return to the heat and warm through very gently (if it gets too hot, the yoghurt will curdle). Stir in most of the coriander.

Taste and add salt and pepper if needed. Scatter over the toasted nuts and remaining coriander, then serve with rice and naan or chapattis.

Spinach and new potato curry - use 600–700g spinach in place of the chard. Remove any tough stalks and add the leaves to the curry once the potatoes are done. Cook for a minute or two before adding the yoghurt mixture.

Winter kale and potato curry - use maincrop potatoes, peeled and cut into bite-sized chunks, rather than new potatoes, and replace the chard with kale. Discard the kale stalks, roughly shred the leaves, and add them when the potatoes are nearly done. Simmer for 2–3 minutes, or until tender.