On Sunday May 27th the inaugural British Cured Meat Festival. is taking place at London’s Borough Market. The 'Steven Lamb' award will recognise someone who has, much like Steven, helped to raise the profile of our industry and worked selflessly to support our artisanal producers. Find out more from the founder, Sean Cannon... 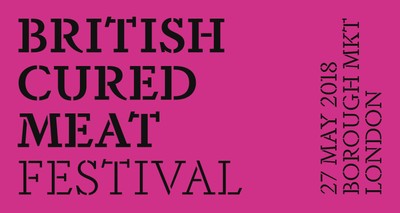 "British charcuterie is enjoying a huge rise in popularity and creating a curing revolution in the food industry. There have always been quality products in the UK but very little were turned into traditional, artisan products such as salami, bresaola or pancetta. It seems the whole nation has now woken up to the huge potential of turning our wonderful, home-sourced ingredients into fine brined, salted and air dried excellence with dozens of brilliant products and producers appearing on the very vibrant market place every week.

Despite this growth and the general excitement around this new craft industry, it is a pretty tough life for our charcutiers. Fresh meat often has to be paid for on purchase or soon after, yet these fantastic cuts need up to eight long months of slowly drying and maturing before the charcutier can sell it on. This means cash is hard to come by and it is a juggling act to keep things afloat. Many hours of hard work processing meat in the butchery and aging in the maturation chambers are required before the profit and loss spreadsheets make the books balance. Glamorous it isn’t – but noble work it is and a craft that I feel is important. Not only for the UK’s status as a farming and food champion but also because good charcuterie requires meat which has been raised in a respectful way. The fat which gives cured meat it’s silky, melting texture has to be slow grown. Therefore, charcuterie gives a new lease of life to forgotten British breeds which offer farmers a genuine diversification option and a chance to add more value to their meat if they take the right care to produce it. You cannot make decent charcuterie from poorly raised meat, so the proliferation of British charcuterie production means better living standards for our livestock.

I am the ultimate charcutier super fan. I would be the one standing in the rain for hours to get an autograph. I love what they do, I love the resulting produce and I love working closely with these artisans on a daily basis. I want to give the industry a day in the sun (with perfect humidity) and for there to be an event that recognises and celebrates these fantastic producers and their dedication to creating delicious cured meat.

On Sunday May 27th (the day before Bank Holiday Monday) at London’s Borough Market, I will do just that by inaugurating the British Cured Meat Festival. Amongst others, River Cottage and particularly Steven Lamb, author of the best-selling & award winning Curing & Smoking Handbook are supporting me in order to put on the UK’s first ever British Cured Meat Awards which will culminate at the British Cured Meat Festival held at Borough Market. After all the entrants have been whittled down, the final round of judging will take place on the day and the winners will be crowned at the award ceremony live at the festival. We will recognise the true kings and queens of cured meat and have the opportunity to meet them, taste their wonderful produce and celebrate the quiet dedicated genius of our British artisans who are in their own humble way helping to establish British charcuterie as not only comparable but up there with the very best cured meats produced around the world."

As well as awards for Best Salami, Best Muscle Meat (whole cut such as coppa, bresaola or cured ham), Best Cooked or Smoked Meat and Best Spreadable Meat there will also be a Produce of the Year Award and River Cottage's own 'Steven Lamb Award' for services to the British cured meat industry. This latter award will recognise someone who has, much like Steven, helped to raise the profile of our industry and worked selflessly to support our artisanal producers.

Tickets are available for the festival here

You can also join us for our meat curing and smoking course.