Looking back on Veganuary

River Cottage Chief Executive Stewart went Vegan for January. Read on to see how he got on ...

Veganuary has been the longest month of my life.

After a difficult start involving too much travel at the beginning of the month, I settled into a good routine. There was one serious blip when I was in London and ate in an old favourite, Baltic, a restaurant that offers a cross culinary experience between Poland, Russia and Hungary. There was no mention anywhere of Veganuary so I asked the waiter about a few items on the menu and whether there were vegan options. ‘You're in the wrong restaurant mate!’ he responded. I ate runner beans, pickled veg and left feeling hungry. 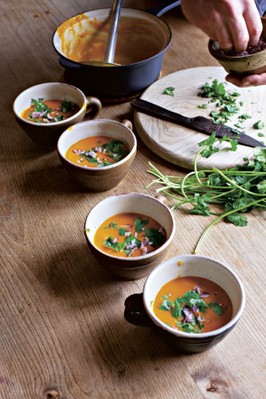 Back in Devon it was much easier. I love cooking at home and happily rose to the vegan challenge. My larder was full of coconut butter and milk, tahini and many bean varieties and if in doubt, I made soup with enough leftover for the freezer. Carrot, Ginger and Orange Soup and Pea and Garlic Soup were my top two. One major issue has been weight loss. I didn’t expect or need to lose 4kg. I assumed I would gain weight with a carby default to pasta, rice and bread but without my beloved dairy it was impossible to supplement my diet with calorific extras. One exciting discovery of the month was vegan chocolate chip salt cookies. I adapted a recipe I often use and substituted milk and butter for coconut alternatives. It was a sweet tooth lifesaver!

Whilst my earlier experience of eating out was disappointing, the Wednesday Curry Night at our River Cottage Kitchen in Axminster was a winner. The vegan curry has been the highlight of each week for me including a sharing platter starter of onion bhajis, spicy apple chutney, soy yoghurt raita, roasted cauliflower tikka and English pea flour poppadoms. Main course favourites are the dahl, potato, parsnip and chard curry and roasted chestnuts with spinach and red chilli. The evening has proved so successful we are extending it through February so I will have the opportunity to try other things on the menu but I am also very happy to continue with the vegan selection.

I will confess to one deviation. At the tail end of the month, I was invited to a fantastic local pop up dinner. Harriet Mansell, a truly incredible chef who has earnt her stripes locally and internationally including a stint at Noma, runs Robin Wylde - www.robynwylde.com – which had a month-long residency in Lyme Regis. I could not face missing out on the fish and seafood options on the 7-course tasting menu. It felt like a worthwhile default as the month ended.

My vegan experience has been tough but fascinating. It is interesting to see what is available for vegans and how the food world is embracing or ignoring a plant-based life. There are many areas that still need to update their vegan offerings including the national train network, which I fell foul of several times. I am not a fan of substitutes like vegan cheese or burgers and would prefer to see a more considered menu – like a great Portobello mushroom with delicious pickles sandwiched between fresh sourdough. I don’t know if I will undertake Veganuary again next year but the journey has been invaluable to how I think about the food choices I make, the importance of dairy in my diet and my continued respect for all our ethical food producers.