Following yesterday’s Twitter exchange about Marine Protected Areas (MPAs) and being asked to produce some references for his arguments Hugh has written this blog ...

The prevailing scientific view is that trawling and dredging have changed our inshore ecosystems in the UK profoundly and in some cases those changes go back hundreds of years. But it isn’t straightforward. Assessing the impact of today’s dredging and trawling on those systems is very difficult. 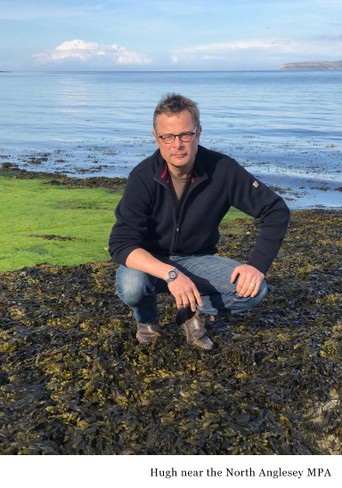 Some people, scientists included, are misled into thinking that denuded sandy or muddy bottoms are the norm, and that scallop dredging and beam trawling have little impact on these high energy, mobile environments.

Others, myself among them, see that our coastal waters without trawling and dredging were very different, with vast swathes of our inshore seabeds rich in invertebrate life and seaweeds that often crusted the bottom over huge areas. These areas provided the richest possible habitats for sustaining a productive inshore fishery. By restoring them, we could have that abundance again.

And I have seen these differences with my own eyes. Seven years ago I dived in the Isle of Mann, first near Port St Mary on a site which is regularly dredged for scallops. Then in Port Erin, on a stretch of sea bed that hasn’t been dredged for over 20 years.

The difference was extraordinary. On the first dive I saw muddy sand, the tracks of the dredge that had recently passed over it, a few stones, some broken shells, and a few scallops that had eluded the dredge. The second dive was one of the most thrilling I’ve ever had in UK waters. The sea bed was literally teeming with life – seaweeds, soft corals, crabs and topshells, brittle stars and starfish. And lots of enormous scallops! When I looked very closely the seafloor was so carpeted and dense with life it was actually moving.

My guide Professor Callum Roberts (Professor of Marine Conservation, University of York) explained to me that these two habitats, before dredging and trawling, would once have been equally vibrant and thriving. And that is true not just on that part of our coast but – with varying balances of species – all around the UK.

Those who deny that our inshore waters were once home to amazing diverse habitats, that supported far greater numbers of fish than they do now, are victims of what has been called “shifting baseline syndrome”. This describes the erroneous belief that if a system has been in place for more than the memory of a generation – say 50-70 years – it is somehow normal, acceptable and appropriate. And that trying to change it, even for the better, is inappropriate.

A big part of the problem is that we didn't study the seabed in detail until it was already largely impacted by mobile bottom gear like trawls and dredges, and we thought what we saw was normal. In places like the Firth of Clyde, a rich mixed demersal fishery has given way to a near scalloping mono-culture within a couple of generations. But the shifting baseline is just slow enough to blind the industry to the damage these invasive methods have done.

But now, places like Lyme Bay and the Isle of Arran, are giving us a different view, and real hope, as we see the transformation back to richness and complexity that happens after bottom fishing with mobile gear is taken out from an area. The attached papers talk about this, and the problems of shifting baseline syndrome, from different angles.

To me it is one of the great tragedies of the raging debate about protecting our oceans that most fishermen see heightened protection of the seabed - through reduced access to the most damaging forms of fishing – as a threat rather than an ally and an opportunity. In some parts of the world, this resistance has been overcome by experience, and fishermen are already reaping the benefits of well-protected marine reserves, that include areas.

To a certain extent, this is already happening in Lyme Bay, near where I live in Devon, which has been protected from dredging and trawling for over a decade now. But as there are almost no restrictions on the amount of “non-mobile” fishing gear (static nets, lobster pots and cuttle fish traps) used in the reserve, the fish themselves are still under intense pressure. So the true potential benefits of having more substantial reserves like Lyme Bay are being masked. Nevertheless, the recovery of complexity and resilience in the benthic life of the sea floor is an inspiring success story.

I have been accused by industry figures of harking back to a past where our seas were diverse and abundant – as if that was a bad thing! All the scientific evidence points to extraordinary powers of recovery in our oceans, when the pressures we put on them are relieved for a while. If our fishermen, marine scientists and politicians could agree to trial that idea in a properly robust way, throughout the MPA network, we could rapidly develop some marine conservation tools that would benefit us all.

Unfortunately the phrase “no-take-zone” has become one of the most inflammatory in the conservationists lexicon. So let’s call it something else. But please, let us all come together to test the notion that, with serious commitment over time, we really can restore the richness and generosity of our seas. 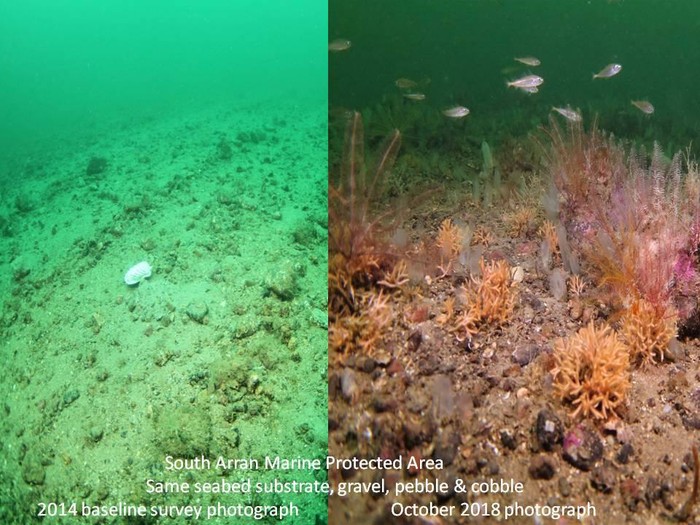 Oyster (Ostrea edulis) extirpation and ecosystem transformation in the Firth of Forth, Scotland

Ecological Meltdown in the Firth of Clyde, Scotland: Two Centuries of Change in a Coastal Marine Ecosystem